Please note: the gallery that appears when you click a thumbnail has an additional option near the bottom RH corner to view the image full size, and – depending on your browser – you should be offered a magnifying glass on your cursor after the download. Beware, these are very large files and may take a while to fetch on a slow Internet link!

Possibly the very first school photo, but it may be a little later than 1924.

Harry Davies was at WBHS in the very early days, and his nephew, Mick (not an old Woden) has very kindly sent me 2 photographs from 1927. I am most grateful for these, as they are the oldest photographs on the website, I believe.

A full school photograph – can anyone locate it relative to the railway line and St Paul’s Road? The second photo mentioned can be found (in a blog posting) by using the search panel to the right and entering “1927”.

I am indebted to Wendy Deichen whose son acquired this photograph from Ken Cholmondeley (whom she believes may be on the photograph). Not surprisingly, it wasn’t in fantastic condition, but I have mended the rips and got rid of some creases and spots. I could spend many hours improving it further, but if I waited until I’d done that it could have been months before it got published. Thanks Wendy.

Thanks again to Geoff Fisher for this one.

This is 1950unknown2 – can anyone identify him, please? Could it be Frank Wainwright?

I am indebted to Reg Kingston OBE FRCS, for sending me this photograph.

Does anyone have this, please?

Thanks again to Reg Kingston for this one.

Edwin Lilly has kindly supplied scans of the 1956 photo, in five pieces, and I have re-assembled them. 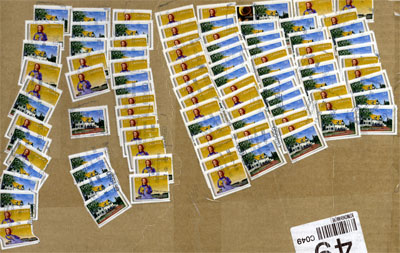 This huge batch of Canadian stamps is a bit of a clue!

Johnny Laakman is not an old Woden, but he contacted me a few months ago to say he had found this 1958 school photo …

I’ll let Johnny tell the rest of the story:

“My name is Johnny Laakmann, I’m 40 years old and I bought an old house about five years ago (1906 is old for Vancouver, British Columbia). I was doing renovations in my house when I found the photo inside a wall behind a fresh air vent that I removed to have the paint stripped off it. It was rolled up and I don’t know how long it had been there but I thought it fit the house very well. It has received many comments from guests as it hung proud over my mantle. Finally, I had my best friend over for dinner one night who went on line to see if this school still existed – hence my first contact with you. It pleases me to send the photo back home and I really hope you enjoy it.”

The photo had been mounted on hardboard, and was very heavy. No wonder it took 6 weeks to reach me! I hope you will agree that it was well worth the trouble, and I thank Johnny most sincerely for contacting me and returning it for us all to enjoy.

The mystery that remains to be solved is who owned the house before him, and why did they hide the photo behind a ventilation grille?

I am indebted to Mick Skyte for loaning this photograph for scanning.

Meanwhile, here it is in 5 separate pieces, L-R, with some overlap.

Meanwhile, here it is in 5 separate pieces, from L to R, with some overlap.

If anyone has photographs earlier than 1946, I should be most grateful if you would get in touch with me (webmaster@wbhs.info). I may also be wrong about 1964 being the last – I may have been absent if one was taken in 1966 …