The School Song and School Hymn

Words written by art master, Alan Legge, with music by headmaster, Edgar Witcombe and music master, B S Smyth, the school song was first used in the late fifties. It waslast used at Speech Day 1969, after a petition (organised by yours truly) re-instated it to its rightful place for a final performance, despite the new management of Wood Green High School wanting to drop it from the proceedings!

No-one was ever able to offer me a reasonable translation of the school motto, Arte, Marte, Vigore, but this did not prevent its being sung “with vigour” whenever it was rolled out! This Latin phrase was also the motto of Wednesbury – as proved by this recent shot of the Art Gallery gable in Holyhead Road: 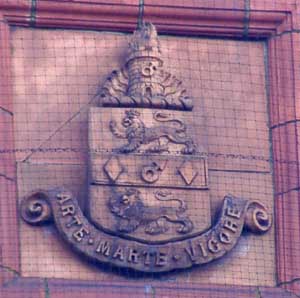 Roger Best tells me he was taught that the motto translated to By Skill, By Iron, By Energy. John Yarnall recalls, “I was there for the first performances, which were introduced to us in Assembly by Edgar Witcombe, shortly after his arrival, as part of his campaign to modernise the school post-Kipping. We were all given copies of the words and made to sing through them by way of practice for speech days, and solemn occasions, etc. As part of his introduction to the new works, Witcombe gave us his translation of the motto. Not very imaginative, but simply Skill, Strength, and Vigour.”

Although I have audio recordings of both the Hymn and Song, my free WordPress account does not allow me to provide music files for download. If anyone would like to have an MP3 copy of these, please contact me and I will send them by email.

Inspire us, Lord, that we may tread
They way, not turn aside,
To seek some easier path, misled
By greed, or sloth, or pride.

Guide us by fearless love of truth
In all our conflicts here;
Help us to fit ourselves in youth
For manhood’s sterner sphere.

Instill in us the will to serve
At school, at home, abroad;
To work and play without reserve,
To seek not vain reward.

Lead us by knowledge of the word,
With heart and hand and soul;
Out tasks, fulfilled, ambitions spurred,
To realise our goal.

Come raise a song – a paean of praise
To Wednesbury’s seat of learning,
Where we devote our salad days
To wisdom – all discerning.

We map each mountain, river, plain,
Our minds with contours graven,
And Europe’s past we live again
With rulers good and craven.

We cultivate the written word,
Declaim in tones resounding,
We learn that facts may be inferred
From philosophic grounding.

In sun we toil on court or pitch –
In rain, when bud bespatters;
On field or track, o’er fence, thro’ ditch
We strive – that’s all that matters.

So raise a song – a paean of praise
To Wednesbury’s seat of learning.
Long may she thrive in all her ways,
New laurels ever earning.

With thanks to Les Gutteridge for creating the more legible, Capella versions of the music.

Those with a musical talent, wishing to wallow in further nostalgia, may wish to re-live the music. Careful examination of the (hand-written) music will reveal, in the first introductory bar, the acciacatura C# which was first performed by music master, Timothy Lees, by accident (?), and became traditional thereafter!

The school hymn was also written by the Legge/Smyth partnership, and was used at the first and last assemblies of each term, as well as at Speech Day and the Commemoration Service.

By the way, here’s a copy of that petition (87KB) , I mentioned earlier.

Events that have their own page: