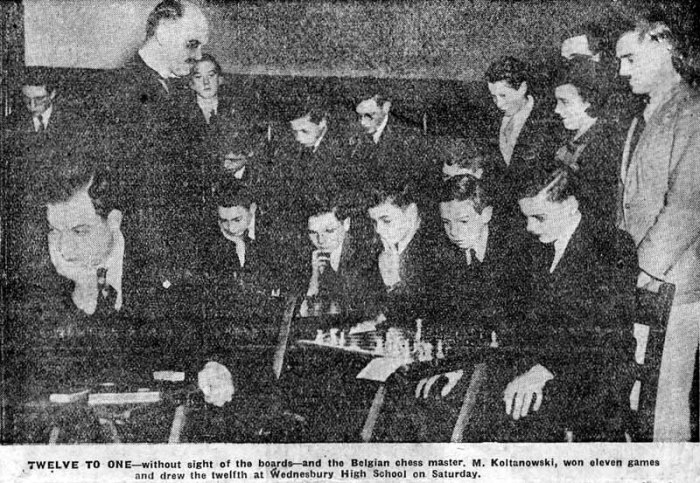 Unfortunately, an undated press photo and article in C S Kipping’s own scrapbook

The player is not, of course, actually blindfolded, but he sits with his back to a table holding a box of cigarettes, possibly a cup of coffee, in addition to one of the finest brains in the world!

His record is 30 games played without sight of board or men, but on most occasions, as on the present, he contents himself with a mere dozen. The moves are called out and M Koltanowski replies, usually with great rapidity, calling up his mental conception of each board in turn.

The chess master expressed himself as very surprised by the strength of the boys’ play, and in a lecture given on Monday afternoon, he said he would be surprised if he met such opposition at most of the clubs he visited.

After an adjournment for refreshment, during which M Koltanowski talked easily on various subjects, he offered to call out all the moves which had been made on any board — and did so without any hesitation! In the end, making very fine combinations, he won 11 out of the 12 games played, and offered a draw to Clifford and Wearing, playing in consultation. The draw was eagerly accepted!

Not only has M Koltanowski this extraordinary power of playing blindfold, but he can also speak some six languages fluently, and make himself understood in several more. His genial disposition certainly goes far to disprove the idea that all chess masters must be gloomy and introspective! Chess is a game and the Belgian master enjoys it, even under conditions which might well strike fear into normal chess players!