The school and its surroundings

St Paul’s Road and School in the 60s

Posted on the Friends Reunited site by Ken Foley, and brought to my attention by Alan Gutteridge, this picture postcard seems to contain staff cars from my own era in the early 60’s.

From from Ian M Bott’s excellent book Wednesbury in old photographs, published by Alan Sutton Publishing Limited of Stroud (ISBN 0-7509-0816-5), but also in the School Archives.

Boys who wished to play had to provide their own racquets.

From from Ian M Bott’s excellent book Wednesbury in old photographs, published by Alan Sutton Publishing Limited of Stroud (ISBN 0-7509-0816-5), but also in the School Archives. 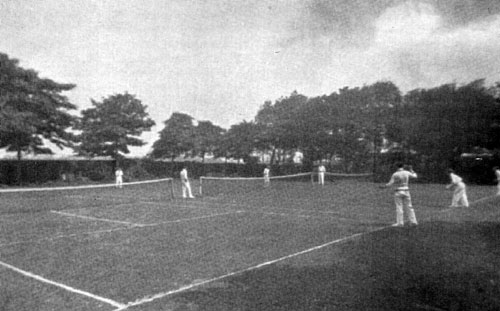 Viewed from approx where the underpass from Wood Green to Axletree Way (PC World/Currys/Ikea). 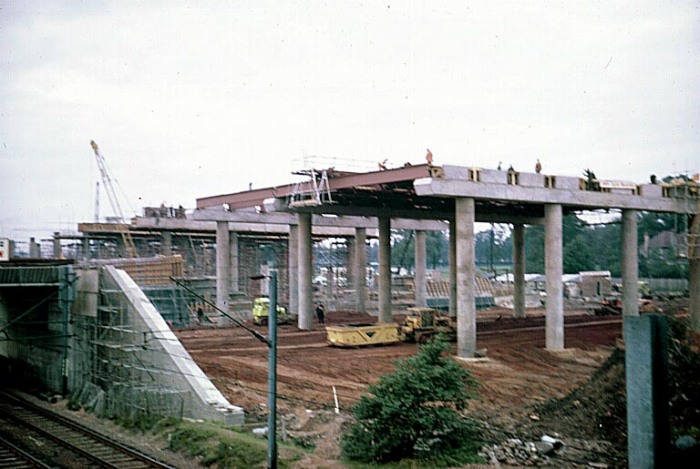 Viewed from approx where the underpass from Wood Green to Axletree Way (PC World/Curry’s/Ikea). 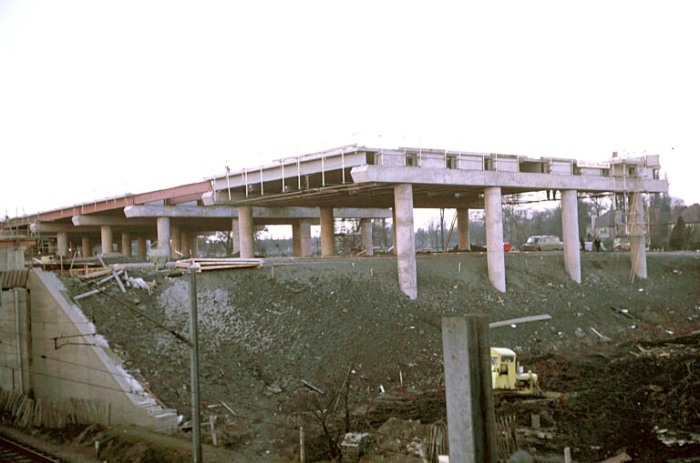 The school pitch, in the snow

Looking from the library towards Wood Green Secondary Modern and what would become the M6 junction 9. Note the old Walsall gasworks and the floodlights of the old Walsall football ground.

Viewed across St Paul’s Road and a snowy pitch from the school library. Whose car is in the
foreground – Mr Rimmer’s Morris Minor shooting brake?

Alan Coad noticed the car in the bottom LH corner of this photograph
and writes:
“I was amused to see part of Andrew Rimmer’s Morris 1000 Traveller in
one of the photographs on the web site. When in the Lower Sixth, I bought it
from Andrew. It was my first car, in which I learned to drive, and the lack
of synchromesh in the gear box meant I had to double de-clutch to change
down. But it served me well – it had clocked over 210,000 miles when I sold it on!”

A section of an aerial view

Shows the 1960s school on the right, and  more recent additions on the field. Notice the tennis courts against the (almost invisible) railway line have gone, and the huts – with their coke-fired stoves, have been replaced!

Taken without permission from a commercial photograph. If the owner objects, please contact me and I will remove this.

With thanks to Roger Best, who took this photograph in March 2002.

Keith Lewis – photos from the 50s

Think I could drastically improve on these images if I tried. Most were just done by rephotographing tiny prints with a hand-held camera to send to Alan Braddock. He is much better than me at remembering all the names. I did try revisiting Wednesbury about 4 years ago when my parents died but couldn’t recognise anything in the centre of the town and little around WBHS.

Many thanks, Keith, Alan (for identifying boys and for telling us more about the choir camps), and Trevor Reece for filling in some other delightful details).

If you have any similar photographs, or you can identify anyone in these photographs, please let the webmaster know!

John “Charlie” Chester from Aldridge and Ted Walker at the back of the old school, near the tennis court, c1958. Dining room windows on ground floor.

Ted lived in Park Lane, Wednesbury immediately opposite the entrance to the F H Lloyd Steel Foundry, on the Darlaston border. Ted was three years older than me and consequently I had little to do with him at School. I do however remember him winning the Backstroke at the School Swimming Gala.

In later years I got to know Ted pretty well as we were colleagues at work at a small firm of management consultants in Walsall in the early 70s. Before this he had spent several years at Round Oak Steelworks in Brierley Hill, after having attended University in Wales. Ted was a batchelor and still lived in Park Lane. He was also very much a boffin —his interest being Operations Research.

Ted was also a very proud Black Countryman, being very active in the Black Country Society, and a relator of Black Country Stories. Christmas Cards were always Black Country Cartoons. In later years he had a weekly column of Black Country musings in one of the local newspapers. After we ceased to work together I would see Ted occasionally —a favorite haunt for him was the Leathern Bottle in Wednesbury. I bumped into him occasionally in Darlaston town but cannot remember seeing him after the mid 80s.

Unfortunately Ted died in 1997. I am sure he will be well-remembered and much missed by his friends.

[Above] School trip to Switzerland in 1957 with Les Smith (with those legs, you can see why he took up Morris Dancing!) and Fred Coatham. 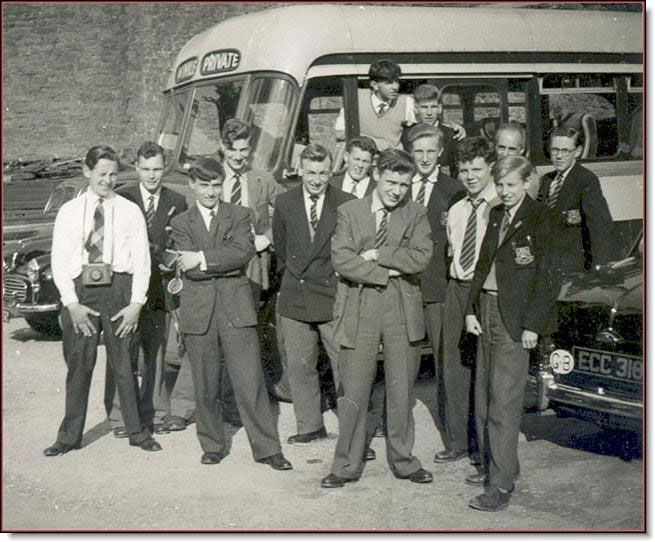 Trevor Reece adds some interesting details about the photo above: 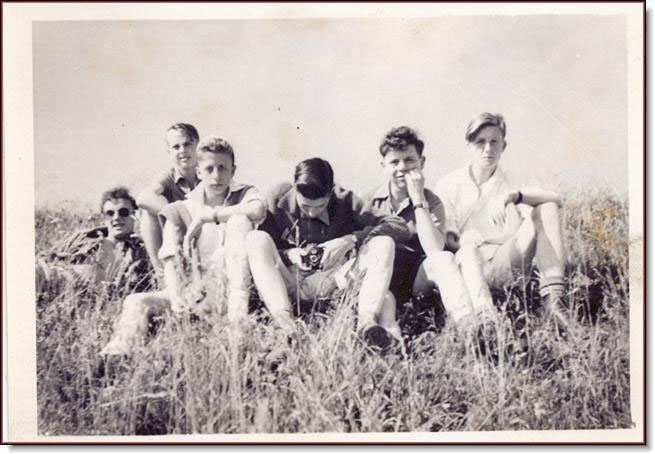 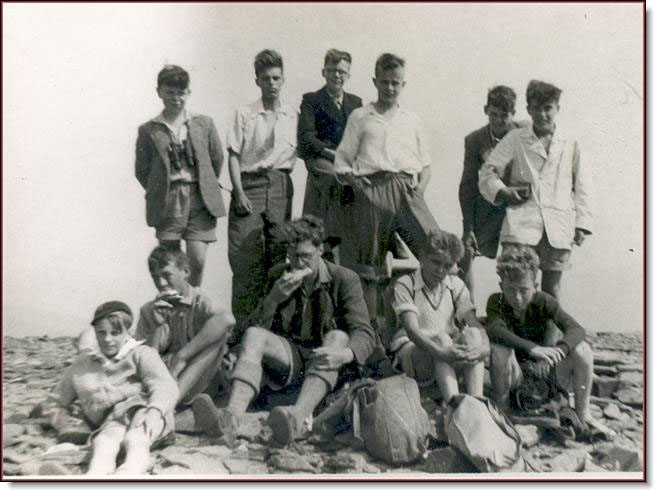 The choir camps were a sort of reward from Colin Rae to the trebles and altos (1st/2nd/3rd formers). Older lads and staff choir members weren’t invited. Bugsy (Rae) taught physics and geography, but his great passion was music. He’d played the organ at Carlisle Cathedral, his home city. He was a bohemian character; a pre-beatnik oddball, but the school loved him for his untidy dress and offbeat ways.

The choir was very good, and we performed an anthem during every Saturday morning assembly.

If you look in the copies of The Woden around 1954/55 you’ll see reports on the choir camps; I wrote one of them myself.

No formal singing went on at the camps. We were under canvas, and the whole day was taken up with the toil of fetching wood and water and cooking over a fire, though we went swimming and had a trip on a bus or train in the middle of the week. I ascended my first mountain, Coniston Old Man (unaccompanied by an adult, of course!) from one such camp, and it set my life on a course from which I’ve never deviated: today, I’m still earning money from supervision of children on mountain expeditions. 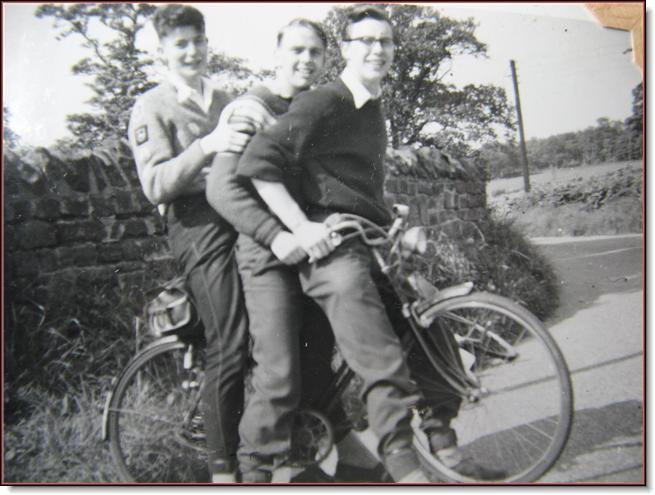 “Chunky” Collins at Sports Day (when?) 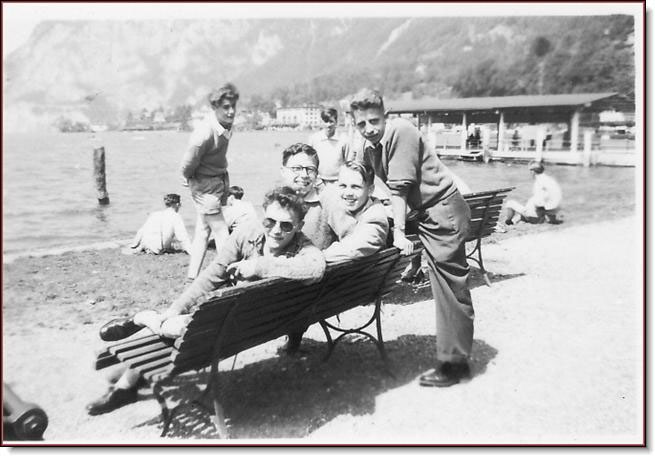 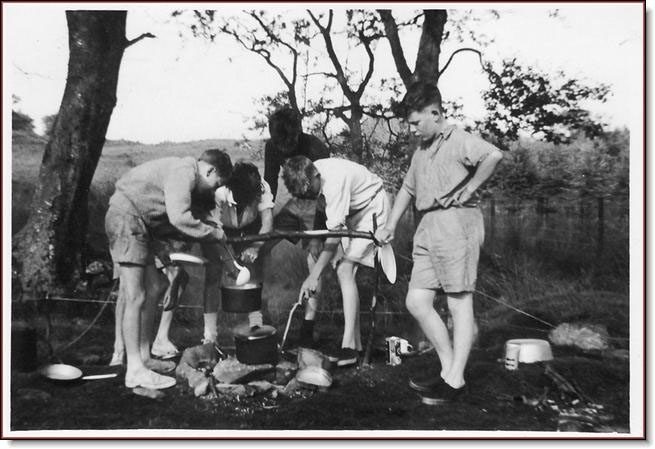 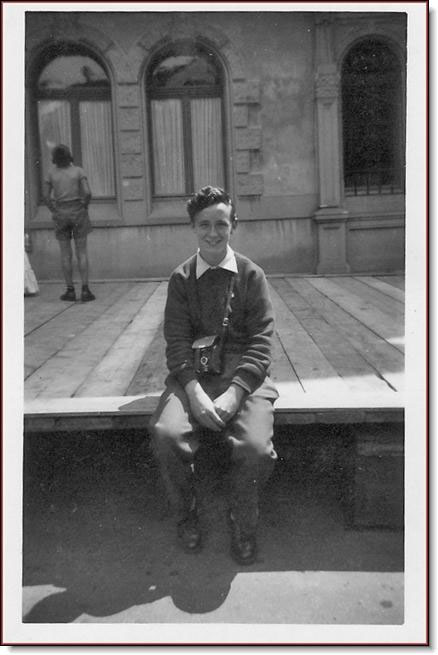 Chris Bullock – photos from the 60s

Chris’s photos will appear in other places around the site, in various categories, eventually, but I thought it was a good idea to keep them together initially. Captions are below each picture.

Chris Bullock and Andy Golder getting the first and second places respectively in the 1966 chess competition.

WBHS Foursome – this might be a challenge for you – myself on the right, but who are the others? I can’t remember any of their names. I think they were in the Upper Sixth while I was in the Lower Sixth. They are walking down Maple Avenue where I lived mainly because I (my dad) had a cine camera and they wanted to film something for the Sixth Form Revue. Apart from all of us being in Wood Green I had nothing to do with them otherwise – note the significant gap between us. Although I was clearly pleased to be helping them out. This must have been 1966/7.

I might have been in the 3rd or 4th form then on some school open day looking at a History essay – this was the main history room where Ede taught – nice desks and radiators!

Myself & my mother (don’t get hairdo’s or glasses like that any more!) meeting an inmate of the biology lab – this was the school open day around 1965/6. 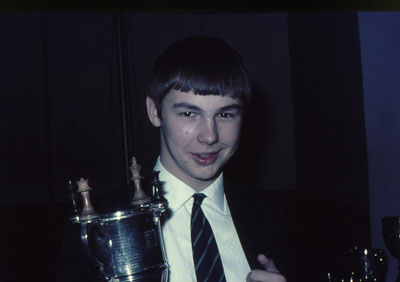 The winner of the chess competition! 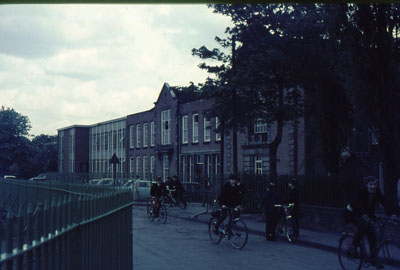 The end of a school day – the first boy on the right is Keith Astbury and I think that I am third with the briefcase – amazingly difficult to carry on the handlebars – don’t recognise anyone else I am afraid. I think this must be 1965 since I’m wearing the special cap with a yellow edge which I think I had in the 5th form.

Above: Three pictures of the M6 under construction

Above: Wood Green Road bridge (over stream and railway) before the M6 went over the top. Looking from Wednesbury facing towards to Pleck/Walsall. The sign facing the wrong way had Walsall on it, I believe.

Deputy Head, Mr Freeman-Jones presenting me with my O-level certificate at Speech Day.

An unauthorised attempt to get rid of the school in 1966 – a couple of years before the Local Authority did it officially… Probably Mr Harry Baptist-Smith getting into the Mini on the left, and possibly Mr Witcombe’s Austin Cambridge on the right.

Reg Kingston – photos from the 50s 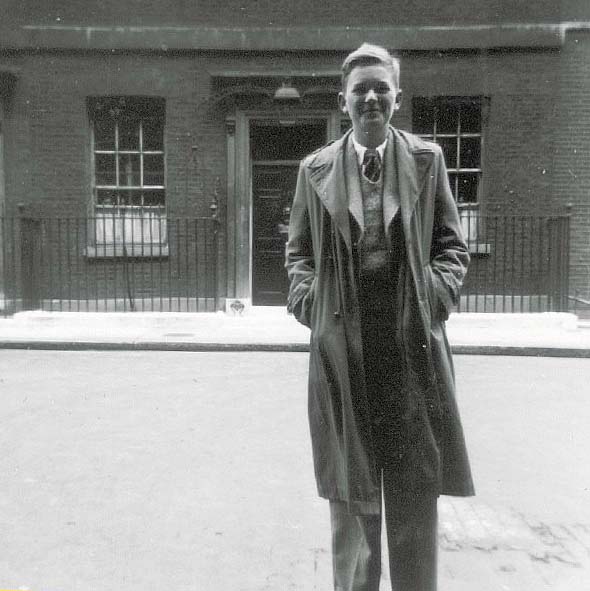 Above: Tony Fortnam outside Number 10 Downing Street, before the days of high security.

Trevor Reece recalls that when he started at WBHS, Tony was Head Boy, and centre half for the First XI football team. “To an eleven year old new boy, he almost had the status of a God.”

Above: The backs of Messrs Ede and Denman and unknown boys at the Tower of London

Reg believes he must hold the record for going on the Swiss Trip on five occasions. Fred Coatham allowed him to join them even when he spent some time at the Wednesbury Commercial College, and later at Wolverhampton Tech.

Above: Unknown boys at the pool in Interlaken (?) 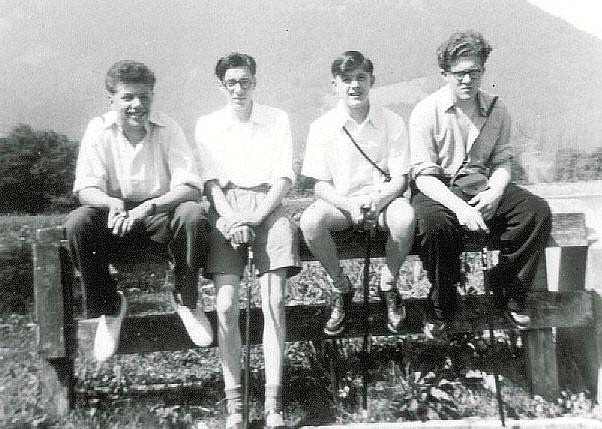 Alan Gutteridge reminds me that in the mid 60s Martin was responsible for creating the commissioned statue that stood round the back of the school. A photograph of the statue is on the press cuttings page.

Geoff Fisher – photos from the 40s

Some photos of the first overseas holiday after the war.

We left Wednesbury on a Tuesday evening caught the midnight train to London from Wolverhampton. We arrived at about 5am and went to a cafe near Victoria for Breakfast. Then by train to Newhaven where we boarded the French ship Londres for Dieppe. Then by train to Paris arriving about 6pm on Wednesday evening. The overnight train to Basle arrived about 7am. Breakfast on Basle station then a train to Interlaken, and finally a train to Wilderswil, followed by a walk to Pension Schonfels in the village of Gsteigwiler. Arrived about 1pm.

To the delight of the boys (not the Staff) the previous occupants of Pension Schonfels was a party of girls from a school near London (I think, Phil Clift will know). They were not due to leave for a couple of hours so they offered to show us around!!! Names and addresses were exchanged. I did not keep in touch but I believe one or two pen friendships survived.

Above: Freddie Coatham, Alan Legge, Frank Wainwright on the balcony of the hotel

Above: The group known as “The Huit” seemed to form as soon as we left England and they stayed as a small group throughout the holiday. “The” was intentional. The names are from left Joe Amos, Geoff Fisher, Harold Westwood, Alan Martin, Phil Clift, Eric Yates, Geoff Parsons, Gordon Gasser. 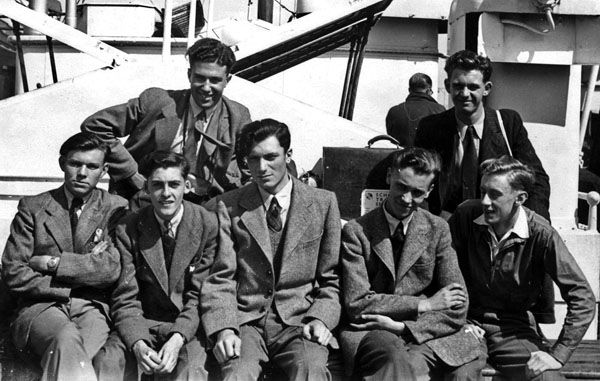 Above: The photo “on board the Londres”. At the Back are Geoff Fisher and Alan Martin.In front from the left are Eric Yates, Geoff Parsons, Phil Clift, Harold Westwood, Joe Amos.

The group photo is with the proprietor and his wife in the centre. I am afraid we didn’t keep a record of those present. I am second from the left at the rear having operated the remote control.