Mr Hatcher supervises trench-digging on the field in 1939 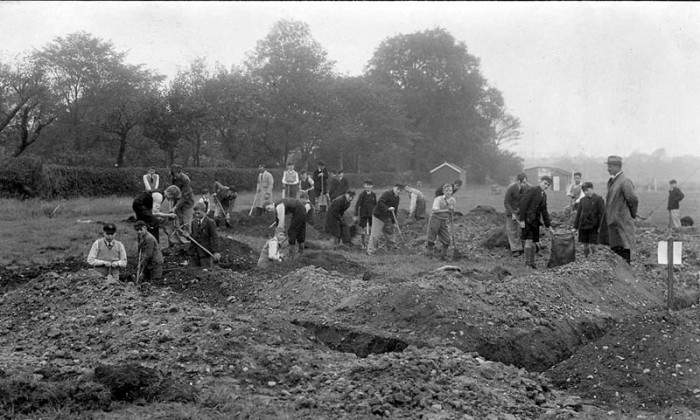 Keeping in touch – letters from home

These letters were originally typed on the old Gestetner/Roneo skins, duplicated with war-time materials. They have lots of illegible bits and badly-formed letters, as you can imagine. I have done my best to decipher them, but in places, have been forced to insert dots to indicate complete bamboozlement!

Letters from staff to the Old Boys

The unveiling and dedication of the War Memorial Plaque took place on 24 March 1952 (reports The Woden), with the ceremony performed by His Worship the Mayor of Wednesbury (Alderman Leonard Whitehouse), who read out the names of the Old Boys commemorated on the Plaque. In the unavoidable absence of the Bishop of Lichfield, the dedication was performed by the Bishop of Shrewsbury (The Right Reverend L D Hammond) who gave an eloquent address. The School Choir sang Richard Farrant’s Tudor anthem Call to remembrance. The parents of the Old Boys whose names are on the memorial, and other visitors present, were subsequently entertained to tea by the Headmaster (C S Kipping).

The Order of Service has miraculously survived!

When you go home, tell them of us and say: “For your tomorrow we gave our today”

A number of former pupils joined the Territorial Army after it became evident that there was likely to be a serious threat of invasion to this country.

Tom was probably the most senior and held the rank of Captain in the Territorial Army. The Territorials were mobilised on the outbreak of war and Tom was killed on active service.

Albert had begun his career on a local newspaper when he joined the RAF. He became a pilot and served with Bomber Command completing 14 sorties against the enemy.

He took part in the Battle of Berlin and completed a number of sorties over this most heavily defended target. He was killed on a raid to Berlin.

Tony took the Observer’s course in the RAF which qualified him as a navigator and bomb-aimer. He completed a tour (28 operations) on light bombers: Bostons and Marylands.

Ironically, he was killed when his aircraft crashed into the Irish sea on a training flight.

Tom was a member of the Glider Pilot Regiment and took part in the attack on Arnhem. He survived the battle, but when the time came for retreat he chose to stay behind to help with the wounded. He was captured and became a Prisoner of War.

While he was in the Camp he was shot by a guard. The bullet hit his femoral artery and he bled to death. It was alleged that he did not move quickly enough into his hut when ordered to do so.

In the film A Bridge Too Far there is footage of Tom at the controls of his glider.

He was known as “Bull” Richards largely because he seemed to charge about the place. He was not a clever footballer but it was always a good idea to keep out of his way!

“Bull” joined the army early in the war and was killed at Dunkirk.

Cliff was a short, sturdy individual who was a full back in the Soccer XI and an excellent batsman in the Cricket XI.

He became a pilot with Bomber Command and was killed on a raid over Germany.

Bob was a very tall, thin person who used his physique to excel at high jumping in the school sports. He joined the RAF and became a pilot. He flew Avro Ansons on cross country flights to train navigators. He was killed later on a raid while serving with Bomber Command.

Jack was a quiet, friendly but serious person who led a good life. He joined the Royal Navy and, as a seaman, served in a destroyer escorting convoys delivering supplies to Russia. His ship was sunk on one of these missions and Jack was lost at Sea.

He kept a diary during his service and it is obvious from what is written there that he did not expect to survive. He wrote: “Do not mourn for me or feel sad at my death. If my hopes are realised it will have been worthwhile, but remember yours is the responsibility to see that my sacrifice has not been in vain.”

Derek was killed in a flying accident during training with the RAF.

Alan was an aircrew member of the RAF and was killed on a mission with Bomber Command.

Jack was an aircrew member of the RAF and was killed in a flying accident.

Norman was killed in a flying accident while training as an air gunner in the Fleet Air Arm.

Press Report on the Dedication of the War Memorial Plaque, 29 Mar 1952

I have a very poor copy of the press photograph (ref wbhs0350)  if anyone particularly wants to see it.

An oak plaque, memorial to the 18 Old Boys of Wednesbury Boys’ High School who were killed In the last war, was unveiled by Alderman Leonard Whitehouse, Mayor of Wednesbury, in the School hall on Monday afternoon, and dedicated by the Bishop of Shrewsbury (Dr Robert L Hodson), deputising for the Bishop of Lichfield. The plaque was given by the Old Boys’ Association.

About 50 relatives and friends of the old pupils were present, besides governors and staff of the school, including the Headmaster, Mr C S Kipping.

In his address, the Bishop said the old boys who fell during the war had never experienced the blessings of a victory which they helped to make possible. They gave their best, for they gave their all. They had paid the supreme sacrifice in days of wild and irresponsible slaughter.

They had never made excuses or attempted to neglect their duties. Their lives had been surrendered so that those left behind might enjoy peace.

The Rev F A Moss, of St Paul’s Church, Wood Green, and the Rev P H Husbands, Rector of St James’ Church, Wednesbury, took part in the service which followed the unveiling and dedication.